The Tooth Fairy and Dentistry!

The Tooth Fairy and Dentistry!

Traditionally, when children in the United States lose teeth, they put them under their pillows. During the night, their parents swap the teeth for a small amount of money and tell the children that the Tooth Fairy visited.

When your children lose their teeth, you may choose to follow this tradition. But how did it get started? Is there a point to it? If you want to learn more about the Tooth Fairy keep reading for all the information from its origins to how much the common family is giving per tooth!

Although the Tooth Fairy as we know is a fairly modern creation, it’s a myth that has evolved over centuries. Many different legends, myths, and traditions surround the loss of baby teeth through the years. While the legend of the Tooth Fairy varies so widely across different cultures, most cultures do have some type of tradition surrounding how a child’s lost baby teeth are disposed of. Some threw the teeth into a fire, others over the roof of a home, and others felt the teeth should be buried. Early European traditions suggested burying the teeth to prevent hardships for the child, while other cultures would wear their children’s teeth to enjoy better luck during battle. One of the more recent traditions that also came out of Europe was a tooth deity in the form of a mouse who entered the rooms of children to take away their baby teeth.

The Tooth Fairy as we commonly understand it in the United States originates from a mix of the good fairy combined with the legend of the tooth deity. The first appearance of the modern Tooth Fairy took place in a children's story written by Esther Watkins Arnold in 1927. Disney’s popularity with fairy characters also allowed the Tooth Fairy to become a common household name.

Across the World other cultures have their own take on the Tooth Fairy and have incorporated the same ideas in slightly different ways:

- In South Africa, a lost tooth is placed in a slipper. A magical mouse takes it from the slipper and leaves a gift.

- In India and much of southeast Asia people toss the tooth over the top of the roof.

- In Argentina, children put their teeth in a glass by the bed and receive a coin or candy in its place

- In Afghanistan children bury their teeth in a mouse hole.

- In Mexico, children place their missing teeth into a box next to their bed. They believe that a magical mouse will come to collect the tooth and leave money behind.

How Much Should My Children Be Receiving From The Tooth Fairy?

In years past a tooth left by our children under their pillow might garner a coin but as times have changed and inflation has occurred that has raised quite a bit. According to a recent survey performed by Delta Dental, you can actually see what the average gift from the Tooth Fairy leaves. 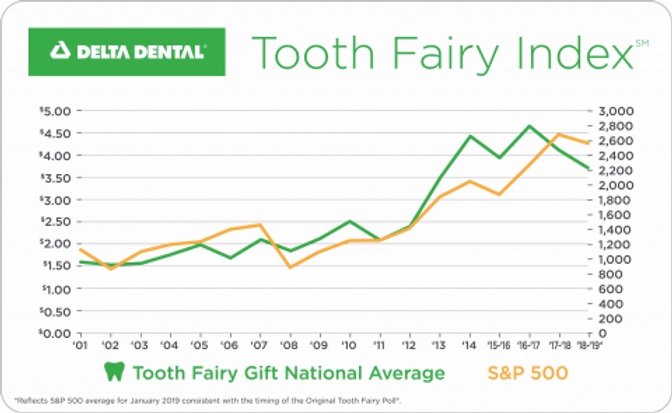 Although money has often been the most traditional gift from the Tooth Fairy, many parents have begun leaving behind items that promote good hygiene such as fun character toothbrushes, tooth-friendly sweets, and other homemade items. This provides kids a sense that taking care of their teeth so that the Tooth Fairy can receive good healthy teeth and cares about their future teeth.

If your child has recently lost his or her baby teeth and you looking to begin the lifelong journey towards oral health awareness please give us a call for an appointment today!

THE THINGS YOU NEED TO DO WHEN A CAVITY OCCURS

How Can I Tell If My Dental Implant Is Failing?

How Much Do Dental Implants Really Cost?

Your reply has been successfully received.

Thank you for Submitting your request. Our Office will get back to you.